The following was written and submitted by Steven Schmidt [sjschmidt79@hotmail.com]. He continues to research the mill's history and is interested in any additional information on the mill or its past owner/operators. Please contact him by email if you have anything to add! Disclaimer: Although carefully researched, the information below may contain some inaccuracies. Sleeping on the banks of the River Aux Vases Creek in southern Ste. Genevieve County for nearly a century now, the remnants of Rigdon’s Mill are still visible today. Built in approximately 1805 by Abijah and James Rigdon, the water-powered grist mill ran for over a century throughout the 1800’s and into the 1900’s under many different owners. Not much is known or documented about the mill throughout the 1800’s, even though several of its owners were locally-prominent individuals. (See many more Photos on Flickr.) Below is a brief history of the property and its past owners.

July 1, 1805 (Abijah Rigdon buys Property for $1000) (Ste. Gen. Co. Deeds Vol. 1, p. 35) 228 ½ acres were deeded to Abijah Rigdon on the River Aux Vases Creek. Although no other specifics were recorded with the transaction, one could assume this is the same property on which the mill was to be built. The property transaction lists previous owners as Abraham Armstrong and Israel Dodge.

More on the Rigdons: Abijah and James Rigdon were reportedly from the Baltimore, MD area and were millers by trade. Shortly after building the mill on the River aux Vases creek, Abijah died (approx.1808). James Rigdon is believed to have run the mill then and married Julia Griffard in 1815. James and Julia had a son, James A., and a daughter, who died as a child. James died shortly after James A.'s birth. Julia later remarried to Peter Dauget, who assumed guardianship of James A. in 1823. It's not clear what happened to the mill property between James Rigdon's death and the next recorded transaction in 1830. Under the care of Dauget, James A. ultimately grew up and married Christina Kirchner and the two had 13 children together. Two of these children (Peter and Felix) would ultimately own the mill again in the late 1800's. 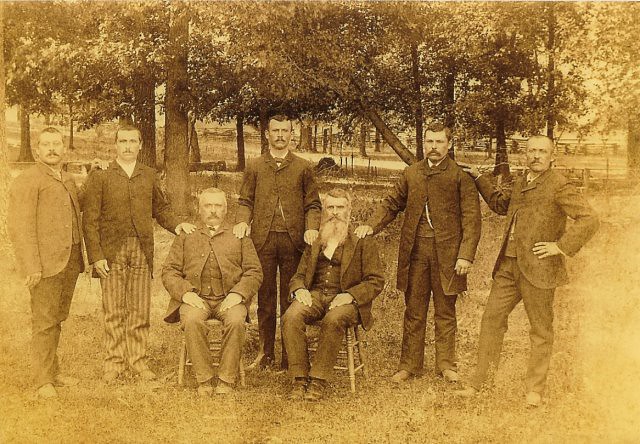 Feb 28, 1837 – Dec 28, 1839 (William Skewes and John Slee) The Beauvais family sold the mill property to Skewes and Slee who were not of Ste. Genevieve in 1837 for $2,950. They were reportedly investors who operated mines and other mills in other Missouri counties. Their initial attempt to sell the mill in January 1838 to James Debow of St. Louis failed as he defaulted on the loan. The sheriff of Ste. Genevieve county (Jesse Robbins) granted ownership back to them, and they ultimately sold successfully in December of 1839.

Nov 2, 1840 – Feb 3, 1846 (Thomas M. and Elizabeth Horine, Joseph Coffman) Wealthy Ste. Genevieve land baron Joseph Coffman was half-owner of the mill property starting in late 1840. Coffman owned thousands of acres of land in the area. It would appear that he and the Horines operated the mill until early 1846.

Feb 5, 1846 – Nov 25, 1857 (Anthony Huck) The Horines and Coffman sold the mill for $5,000 in 1846 to Anthony Huck. They held a mortgage for the property, for which it appears final payment was never made. In late 1857, Joseph Coffman, Sr. died, and his will and testament ordered that the mill and adjoining property owned by Horine and Coffman be sold by the executor of his estate. No mention of Huck in the will.

Nov 25, 1857 – Nov 5, 1863 (Robert B. Holmes and Sarah Holmes) Still in 1857, Joseph Coffman (Jr.) and Emily Coffman issued a mortgage on the property to Robert B. and Sarah Holmes. They apparently made payments to the Coffman family (and perhaps the Horine family) until a lawsuit in 1863. Thomas Horine had apparently passed away, and his descendants and widow with new husband William Riley) were apparently at odds with another potential owner Anton Schladman). By order of the court, the property was sold in 1865 by public auction. The winner of that auction was Ignatius Roth, who bid $1,800.

1865 – 1881 (Ignatius Roth) Noted as a local hard-working farmer, Ignatius Roth owned the mill and property for about 16 years.

1881 – 1883 (Henry Sexauer) The mill was owned by Henry Sexauer for approximately 2 years before being sold in a public auction.

1883 - 1915 (Peter A. Rigdon and Felix J. Rigdon ) Grandsons of one of the mill’s original builders (James Rigdon), Peter and Felix Rigdon purchased the mill back into the Rigdon family in 1883. It would appear that it was primarily operated by Peter, since Felix was a noted educator and elected official (Ste. Genevieve county recording clerk) for many years. Since Felix’s obituary makes no mention of operating the mill, one would assume he probably was an investor rather than an operator.

1915 - (Fred “Frits” Shuh) Although not documented, the passed-down story is that Fred Shuh was paid $400 to dismantle the old mill, as another mill upstream (in Staabtown) was more accessible via better roads.

(The above information is based on county land records, Goodspeed’s History of Southeast Missouri, many Ste. Genevieve Herald Newspaper Articles, and various Missouri State Historical Society documents. Many thanks to members of the Ridgon Family who also contributed directly to this web page, especially Mike Basler (mailto:mbozman13@charter.net) for the family photographs.)